Roxy Gellar: It was YOUR tolerance for SaveMe Oh that created the issue. It was your refusal to have integrity that allows for more damage to be done. You were tolerant of SaveMe’s griefing (as well as hosting her) and her griefing The DoveRhode. As a result I was banned. It was your selfishness that destroyed a valuable friendship and support for you, you, Echo, have to earn respect and your mercenary approach and self centered exploitation destroyed any you may have had in the bank.

You forget, I’ve been King of the Mountain in the real world. I know what it takes. And there is a time limit to get there except for rare exceptions. For the most part, I advise, don’t quit your day job, kid.

Laugh it up. Maybe learn a few songs if you can.

You go on to your Mexican boys… I mean Cat’s Circus (same thing really). It’s a’ cause of you that I’m like this!

Don’t get the wrong idea. It’s just that you suck but you suck less than other options in virtual reality for those dates and times that I’m aware of currently.

Oh I am so tempted to open up a can of Truth on an ungrateful cartoon boy named Echo. But it’s all so obvious. Such is life. This is why only the most sad alcoholics like Cat Blow Job Boucher are slaves to their virtual reality addiction spaces through out the week for months and years on end.

It’s. A. Game. And real musicians do not depend on it as their primary source or outlet of creativity.

Seriously though, Echo. Can you play even ONE! Just ONE! One song that anyone would recognize as a song? Melody, rhythm… you know, structure, three verses, bridge, chorus. I really don’t think so.

It would be a hoot to hear something like Sweet Home Alabama or Taking Care of Business. I don’t think I’ve EVER heard you play any chord known to man.

Roxy Gellar: OH MY GAWD! This is hilarious. You didn’t start the war? You ARE THE WAR. Sad and silly… but it’s all you regardless. I am amused to see you and your minions seeing things that aren’t there. Your mental illness, Blow Job Boucher’s alcoholism, and your lil circle’s group psychosis is getting much worse. And much more amusing.

Hello folks out there in reader land, you see SaveMe Oh, Blow Job Boucher, maybe a minion or two WANT me to use their names, post their attacks and videos because they want free publicity. This reaction for example is going to be reposted without my permission as photos were used without permission.

But I’m long over it. I’m almost never in SL anymore frankly, except to do things that are totally unrelated to music events. There’s a big old world out there, you’re missing it.

Thank you for giving me so much importance in your life! I don’t even have to be online and I’m the center of your attention. You see me there when I’m not. 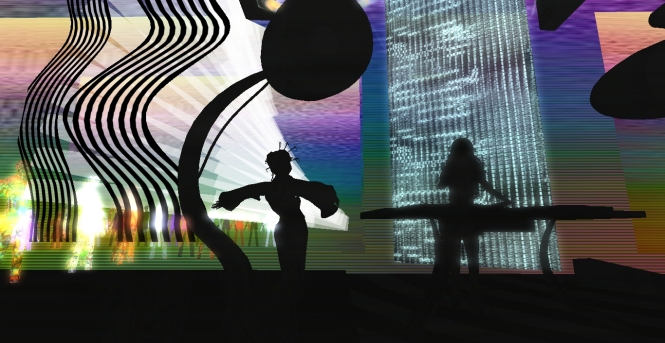 To Deceptions Digital and Echo Starship

Roxy Gellar:  There are exceptions. And then there is evidence of this Truth. For example, DeceptionsDigital And Echo Starship, two virtual reality gamers. For an extended amount of months, maybe even years, whenever I was in Second Life, one or the other would IM at least once a week and ask me to host a concert for them. Echo begging me to add him to an established event billing routinely.

Because I felt it was a respectful and warranted expense I would pay them even though they were disrupting my plans for my time in virtual reality. And essentially asking me to do work I hadn’t planned on. This is above and beyond creating graphics, posting to SL Events and facebook events, and posting to up to 6 in world groups as well as up to 18 facebook groups.

They got the attention from others they were really looking for in asking me to host and promote them. And I was fine with that. But their gratitude was very short lived.

To DD’s credit she would kick back 500L. Echo is a taker. Never did he tip the venue or give me any form of gratuity.

8 thoughts on “To All The Snakes I Loved Before”

Zebra Crossing
SaveMe Oh's movie ALL OF ME in the OVERDRIVE program of SUPERNOVA https://vimeo.com/315450958
Nossa senhora da copulação
The lady with an ermine
Girl in white